10 Ways That Workplace Wellness Must Evolve in the Future

#8 in Series: You Can Mock Holacracy, but Top-Down Power Hierarchies Will Change 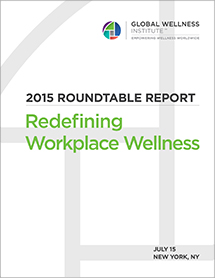 There has been much recent media derision of companies like Zappos’ experiments with holacracy, a new “no boss,” “curb the egos” approach to running businesses that removes the management hierarchy and distributes power across roles. But while holacracy’s early fumbles may be easy to mock, the roundtable argued that less paternalistic, hierarchical, top-down power structures will only continue to rise within companies.

And this model of more self-responsible, self-actualized employees could have positive implications for companies’ wellness initiatives – which have been plagued by lack of engagement and passivity. Maggie Hsu (Vice President, Business Development, Downtown Project, founded by Tony Hsieh of Zappos.com), spent time within a holacractic model, noting that it had both positive and negative results. “This restructured idea of work empowers people to be entrepreneurs and their own bosses as it explicitly asks everyone in the company to identify problems and do something about them. And it lets people fluidly move in and out of work, which resonates particularly well with millennials, who often want to work on what they want, when they want to.

But it fails to address the human aspect, including compensation, promotion, and professional development. While self-management is something that all companies might consider in some form, pure holacracy is ironically a closed-source system with a set of rules, the “Holacracy Constitution”, which reads like a bad Shakespearian play.”

But Hsu and others argued that less rigid company power structures (with fewer power “layers”) are the ascendant model, in part because more women are in higher positions than ever before. More experimentation is needed and coming, not only because the redefinition of power in companies can itself be a form of “wellness” for many workers, but because more open business structures enable cultures of wellness where there is more self-motivation and shared responsibility.