Psychedelic peaceful civil disobedience arrives in the Nation’s Capital when a sit-in is to be held May 9, 2022 at the doorstep of the Drug Enforcement Agency to protest the agency’s block of psilocybin (known in its fungal form as “magic mushrooms”) for the terminally ill, despite the federal “right to try” law passed with the unanimous consent of the U.S. Senate and signed into law in 2018 by President Trump. Organizers include philanthropist David Bronner of Dr. Bronners Soap and he will be joined by some of the Founding Members of the Global Wellness Institute’s Psychedelics & Healing Initiative, and cancer advocates.

TREND 2: The ABCs of LSD

TREND 3: FOR CHANGE THAT STARTS AT THE TOP, TRY THE UNITED NATIONS

Reformers are asking the United Nations, the United States Drug Enforcement Administration and the British Home Office to reschedule psilocybin, known in its fungal form as “magic mushrooms,” which was red-flagged by the 1971 Convention of Psychotropic Drugs, as “Schedule I” a condemnation reserved for pharmaceuticals with “no currently accepted medical use” and “high potential for abuse.” Although psychedelics like LSD and psilocybin are not addictive and do no toxicological damage, according to a tranche of research in the public domain.

Well-documented medical research shows that psilocybin can be effective when used for intractable medical issues such as depression, anxiety, alcoholism, substance abuse, and post-traumatic stress disorder. The FDA has responded to those research results with positive action, granting what is known as “breakthrough” designation for psilocybin medication to expedite pharmaceutical development, a multi-year process. In Switzerland, psilocybin rescheduling at the United Nations is being led by the ITPRI, the International Therapeutic Psilocybin Rescheduling Initiative, and its chair and cofounder, Chris Kodderman. In America, psilocybin rescheduling efforts at the DEA is being led by Kathryn Tucker, special counsel at Emerge Law in Oregon, and a co-founder of the Psychedelic Bar Association and a Founding Member of the GWI’s Psychedelics & Healing Initiative. In the United Kingdom, efforts to reschedule psilocybin at the British Home Office are led by Timmy Davis, Psilocybin Rescheduling Project manager for the Conservative Drug Policy Reform Group.

The world’s first psychedelic peer support phone line opened last spring. And in the first year, the calls have been ringing off the hook. Over 100 volunteers have been trained, over 13,000 hours of support have been provided, some 2,550 conversations have been logged. In its first year Fireside launched an equity initiative that allows callers to speak with volunteers who are military veterans, transgender, or black, indigenous, or people of color. Those equity initiative volunteers will receive scholarship support for professional development to continue to deepen their work in the field of psychedelic healing. Co-founder Hanifa Nayo Washington, Fireside’s Chief of Strategy is a Founding Member of the Psychedelics & Healing Initiative.

The “tidal wave of hype” is how the clinical psychologist Dr. Rosalind Watts describes the extremely positive support that greets most news of psychedelic research today. Dr. Watts cautioned in a February essay that “over promising, magical thinking, marketing, sugar coating. . . gold rushing” could damage the very real and evidence-based benefits that psychedelic medicine may deliver.

Other voices for accountability in the emerging field of psychedelic medicine can be found at New York magazine, which produced the “Cover Story: Power Trip,” a podcast series that reported on the abuse of patients by psychedelic therapists. At STAT, the Boston Globe-owned health website, science writer and investigative reporter Olivia Goldhill has reported on a lawsuit that raises concerning questions about psychedelics and eldercare. As the field of psychedelic medicine continues to grow, expect greater levels of accountability in the weeks and months to come. This trend will be with us for the foreseeable future.

Next month, the University of Wisconsin—Madison School of Pharmacy will welcome students to the first psychedelic pharmaceutical sciences master’s program in the world. The degree, an MS in Pharmaceutical Sciences: Psychoactive Pharmaceutical Investigation, is a global first.

Of course, LSD, psilocybin and MDMA remain Schedule 1 drugs and illegal under US federal law and illegal in most nations, with the exception of psilocybin, which is not illegal in the Netherlands or Jamaica. Yet, the FDA has granted both psilocybin and MDMA a “breakthrough therapy designation” for research purposes. That’s a step, the FDA says, that is reserved to “expedite the development and review of drugs that are intended to treat a serious condition… [when it shows] a clear advantage.”

With these signs of encouragement from the FDA and increasing awareness of the limitations of treatment for mental wellness, research in psychedelics has skyrocketed. A literature review of the PubMed.gov database shows a nine-fold increase in psilocybin research published between 2010 and 2020; LSD saw a three-fold research increase in that same time period; research interest in MDMA has continued to stay consistently strong following a spike in research activity that peaked in 2011 when the number of published studies on MDMA increased by the astronomical factor of 25.3.

TREND 3: Changing Hearts and Minds, and the Law, too

At the federal level, for the first time, the House Appropriations Committee in July released a budget report with an urgent request for psychedelic therapies. Citing the suicide rate for US veterans of 17 a day, the report’s lead author Rep. Rosa DeLauro pleaded for the National Institutes of Health to “undertake, and where appropriate expand, research to evaluate the effectiveness of psychedelic therapies in treating PTSD, major depressive disorder, and other serious mental health conditions.”

At the state level, it’s not just the West Coast anymore. Changes in psychedelic drug laws are sweeping the nation, even in Texas.

Voters, aware of the growing research on how psychedelic medicines can achieve therapeutic benefits in the treatment of depression, anxiety, PTSD, existential distress during end-of-life, and addiction disorders, are passing ballot measures and supporting legislation. The Mile High City of Denver, Colorado, was first with a 2019 ballot measure to decriminalize psychedelic psilocybin mushrooms.

In the November 2020 election, Oregon passed two milestone initiatives in support of psychedelics. One decriminalized possession; the other authorized the state’s health department to license psilocybin growers and train facilitators in psychedelic-assisted therapy with an eye to making treatment available in 2023. That November election also saw Washington D.C. pass Initiative 81 to decriminalize psychedelic plants and fungi. The measure received 76% of the vote.

In Texas, conservative Republican icons, including the former Texas Governor Rick Perry and US Senator Ted Cruz, urged support of a bill that would authorize the study of the therapeutic benefits of psychedelic medicines to treat military veterans diagnosed with PTSD. Last month, that bill became law. A measure before the California State Assembly, S.B. 519, to legalize possession of psychedelics is out of committee and expected to reach the floor for a vote and be signed into law.

Recent numbers from the Kaiser Family Foundation and other researchers chart ever-rising reports of depression, anxiety and COVID-related distress. The public is asking for new medical approaches, and companies are listening, especially psychedelic companies. Those psychedelic start-ups that emphasize new research and innovative approaches are now receiving investor attention.The UK-based Compass Pathways made history in September of 2020 when it was the first psychedelic company to arrive on Wall Street with a listing on the NASDAQ exchange.

Other psychedelic companies now listed on the NASDAQ include MindMed, as of March 2020, which counts Kevin O’Leary from the television show “Shark Tank” among its investors.

ATAI Life Sciences, founded by Christian Angermayer, the Berlin-based billionaire, with support from PayPal founder Peter Theil, listed on the NASDAQ in June. On July 29, Toronto-based Field Trip Health became the latest psychedelic company to list on the NASDAQ.

In July, the Toronto-based Cybin became the first psychedelic company approved for listing on the New York Stock Exchange.

From the writings of author and expert Michael Pollan and the voice of maverick podcaster Joe Rogan, it would be easy to think that the public media conversation about psychedelics begins in the pages of the New York Times and The New Yorker, where Mr. Pollan’s work regularly appears and finds outer limits somewhere among the 190 million downloads a month enjoyed by the wildly popular Mr. Rogan. But that would miss the remarkable flowering of magazines, newsletters, websites, and podcasts that have blossomed.

psymposia.com is a nonprofit media organization that takes no advertising and gives no quarter, offering crusading journalism and coverage of a field with plenty of issues that demand close coverage. thetripreport.substack.com Founded and written by the often-quoted Zach Haigney, “The Trip Report” covers “psychedelic science, medicine. . . and accelerating digital health technologies.”

Psychedelictimes.com, edited by Wesley Thoricatha, is “a hub for new developments in the science and application of psychedelics for healing and therapy.”

DoubleBlindmag.com
Founded and edited by Shelby Hartman and Madison Margolin, praised for its long-form narrative and art direction, DoubleBlind describes itself as “a biannual print magazine and media company covering timely, untold stories about the expansion of psychedelics around the globe.”

Psychedelicreview.com was founded “by a small group of scientists committed to improving the quality of and access to scientific information about psychedelics.”

lucid.news provides “informed, honest and transparent journalism that covers the growing integration of psychedelics into society and their broad implications for human wellness.”

“Psychoactive” is the podcast hosted by Drug Policy Alliance Founder Ethan Nadelmann, produced by iHeartMedia, and warmly praised by GQ Magazine and elsewhere.

A constellation of luminaries in psychedelics is now shining brightly. Two-time Stanley Cup winner Steve Carcillo, a former NHL player for the Chicago Blackhawks, is founder and CEO of Wesana Health Holdings, which looks at using psychedelics to heal Traumatic Brain Injury.

Authors, public intellectuals and celebrity doctors Andrew Weill, MD, and Deepak Chopra, MD, have both joined psychedelic companies. Dr. Weill serves on the Advisory Board for Field Trip Health, the Toronto-based company now traded on the NASDAQ. Dr. Deepak Chopra will be working with Mind Medicine, also traded on the NASDAQ, through his Chopra Foundation. The Foundation and Mind Medicine shared a public statement explaining the partnership will “help build public awareness around the use of psychedelic medicines to treat mental illness, remove outdated stigmas, and ultimately research mental wellbeing approaches.”

The late reggae great Bob Marley will be a name associated with Psilo Wellness in Jamaica. Psilo will first release Marley-themed wellness products and later work on a Marley-branded psychedelic offering.

Mind Cure Health, a British Columbia company researching psychedelic compounds, has appointed a Nobel Peace Prize recipient as an advisor to its business. Jerry White, who is on the faculty of the University of Virginia, is active in working to ban landmines and building resiliency to help with trauma recovery. He is a co-recipient of the 1997 Nobel Prize for Peace. 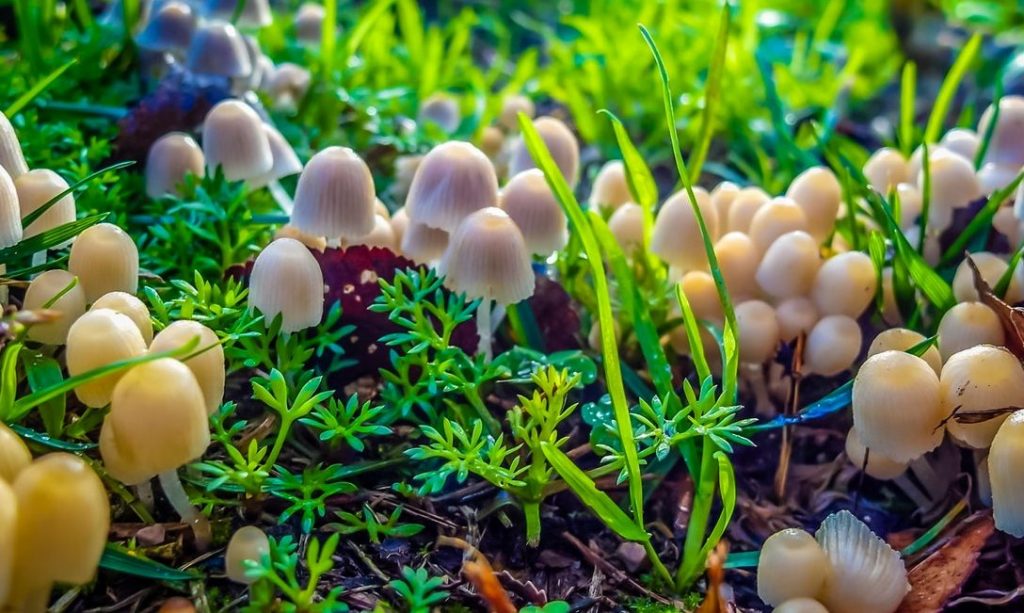 Learn more about Psilocybin on wellnessevidence.com

Fill out this form to be connected to the Initiative Chair.