This year, climate catastrophes are here for all to see: dramatic floods in China’s Henan province, parts of Europe and India, and Uganda; unbearably high temperatures in many parts of the world, including North Africa and Turkey; “unimaginable” wildfires in the West of the US, Canada and Siberia. The list goes on. Back in 2004, insurance companies involved in the World Economic Forum Global Risk Network warned that such extreme weather events would become the norm. Even so, what’s happening today is taking scientists by surprise.

One, speaking for many, confided that he’s shocked by the severity and frequency of these events that take most existing models “off scale.” Not only will the goal set in Paris six years ago to keep the global warming rise below 2 degrees Celsius be missed, but also the dismal possibility of a 3 Celsius degree rise in the coming decades is looking more and more like a reality. This matters so much because global warming has nonlinear effects: 1C is bad but manageable; 2C is very bad, but adaptation can mitigate the pain; 3C will be simply untenable for many people and species.

The consequences of this dramatic change for human wellbeing and the wellness industry are manifold and multifaceted. One has to do with air pollution, which global warming tends to exacerbate. Every month brings new evidence of the deleterious effects of air pollution on our physical and mental health and wellbeing. The fact that 9 out of 10 people around the world breathe air containing high levels of pollutants and that it causes 7 million premature deaths per year (according to the WHO) is now well documented, but maybe less so the connection between air pollution and cognitive function and dementia risk.

At the July AAIC 2021 (Alzheimer’s Association International Conference), multiple presentations focused on how PM 2.5 (i.e., particulate matter less than 2.5 microns wide) significantly increases the risk of dementia and how reducing air pollutants might benefit long-term brain health. A presentation from US scientists showed that the reduction of PM 2.5 and traffic-related pollutants (NO2) per 10% of the EPA current standard over 10 years was linked with (respectively) 14% and 26% reductions in dementia risk and slower cognitive decline.

The broad takeaway for the wellness industry: Air quality will increasingly become an important determinant in wellbeing investment and consumption decisions. (For example: Consumers will think twice about going to a wellness retreat in a highly air polluted location, rendering the investment decision to build the resort in the first place highly questionable.) 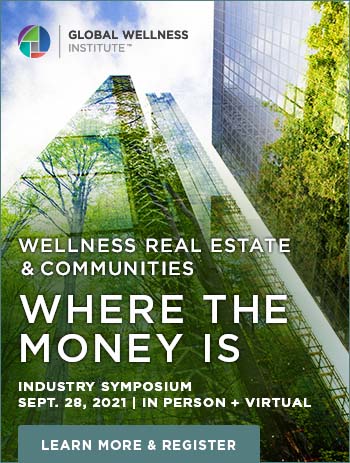