Cesena, Italy – October 8, 2018 – The global wellness industry grew 12.8% in the last two years, from a $3.7 trillion (€3.2 trillion) market in 2015 to $4.2 trillion (€3.6 trillion) in 2017, according to an in-depth research report, the 2018 Global Wellness Economy Monitor, released today by the non-profit Global Wellness Institute (GWI). This new data on the ten markets that comprise the global wellness economy provides fresh evidence that wellness remains one of the world’s biggest and fast-growing industries.

The report was released today at the 12th-annual Global Wellness Summit being held at Technogym Village in Cesena, Italy, which has attracted 630+ industry leaders from 45 nations. And at today’s press conference the spotlight was on the strong, recent growth seen in European and Italian wellness markets.

From the finding that Italy’s spa industry revenues jumped nearly one-third from 2015-2017 to the fact that Italy ranks 7th worldwide for workplace wellness expenditures, you can access it all IN THE FULL REPORT HERE. 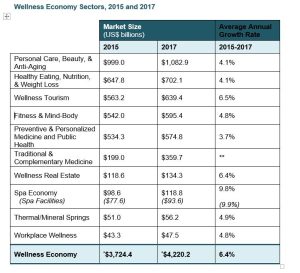 **For the complementary medicine market, the definition changed since 2015 (adding traditional medicine sectors like Ayurveda, Traditional Chinese Medicine), so a formal percentage growth can’t be provided.

Wellness tourism has deep roots in Europe, and governments and destinations are looking to it to differentiate their tourism sector and combat over-tourism. For instance, Italy recently launched Terme d’Italia, a project aimed at stimulating demand for spas/wellness resorts in eight regions.

Italy: Ranks as the 5th-largest thermal/mineral springs market in the world, with 768 facilities earning $1.7 billion (€1.5 billion) in revenues a year. Italy trails only China, Japan, Germany and Russia globally.

Global: Valued at $47.5 billion (€41 billion), the workplace wellness market remains very small compared with the massive economic burden and productivity losses (10-15% of global economic output) associated with an unwell, disengaged workforce. Only 9.8% of employees worldwide (321 million people) are covered by some form of workplace wellness program.

Italy: Ranks 7th worldwide for workplace wellness expenditures, with a market worth $1.63 billion (€1.4 billion) in 2017.

Global: Real estate that incorporates intentional wellness elements into its design, materials and building (and amenities and programming) is growing fast, as more people want to bring more health into the places where they spend the majority of their time. The market grew from a $118 billion (€102 billion) in 2015 to $134 billion (€116 billion) in 2017, or 6.4% a year. There are now 740+ wellness real estate projects built or in development across 34 countries.

Europe: Is the 3rd-largest wellness real estate market, behind North America and Asia-Pacific. It grew from $29 billion (€25 billion) in 2015 to $31.7 billion (€27.4 billion) in 2017, or 4.5% a year. There are currently 61 wellness real estate projects built or in development across Europe. The GWI notes that Europe (and Italy’s) historic spa towns have an opportunity to redevelop themselves as healthy living communities.

About the Global Wellness Institute: The Global Wellness Institute (GWI), a nonprofit 501(c)(3), is considered the leading global research and educational resource for the global wellness industry and is known for introducing major industry initiatives and regional events that bring together leaders to chart the future. GWI positively impacts global health and wellness by advocating for both public institutions and businesses that are working to help prevent disease, reduce stress, and enhance the overall quality of life. Its mission is to empower wellness worldwide.