Physical activity is intrinsic to wellness, and it is no surprise that fitness has long been a major segment and a key driver of the wellness industry. In Move to be Well: The Global Economy of Physical Activity, GWI estimated that global consumers spent an estimated $108.6 billion (an average of $384 per participant) on doing fitness activities in 2018. When most people think about “fitness,” they probably think of memberships in gyms and health clubs (like Equinox or Planet Fitness) or boutique studios (like SoulCycle or Orangetheory). But the fitness market is far broader than just paid memberships or classes at commercial gyms, health clubs and studios.

GWI estimates that 3.7% of the world’s population are members of gyms, health clubs and fitness studios and/or participate in structured or independent fitness activities or classes on a regular basis (as of 2018). GWI’s measurement of fitness participation is much broader than just the number of paying members at commercial gyms and health clubs, who only represent a portion of the market. We include membership and participation in a variety of other types of gyms and fitness classes—in public, nonprofit, university, hotel, outdoor, home, and other settings, both free and paid—as elaborated on below. 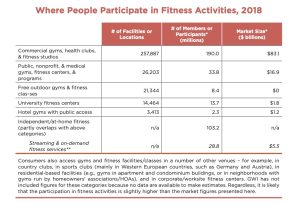 People do fitness activities in a wide range of venues. GWI estimates that in 2018, about 190 million people were members of private/commercial gyms and fitness facilities across nearly 258,000 locations in 211 countries. This is what most studies generally consider to be the extent of the “fitness market.” However, there are many other ways to participate in fitness, and not all of them require monetary expenditures. Note that all data discussed here are from 2018, and this landscape has shifted dramatically during the COVID-19 pandemic—with even greater movement toward independent, outdoor and non-gym-based fitness activities.

• An additional 33.8 million people utilize public, nonprofit and public-private gyms and fitness facilities across more than 26,000 locations, typically with low or subsidized membership fees. These include 1) government-subsidized (but often privately run) gyms and leisure centers in the United Kingdom, Ireland, Spain, Australia and New Zealand; 2) public and city-run gyms and community centers in Japan, United States, Canada, Singapore and the Nordic countries; 3) nonprofit facilities such as YMCAs (which primarily offer fitness facilities in the United States, Canada, United Kingdom, Australia, New Zealand and Japan but not in every location around the world); and 4) medical fitness centers (gyms integrated with health care providers, targeting populations with medical conditions, predominantly in the United States).

• GWI estimates that there are over 21,000 free outdoor gyms and venues offering government-sponsored/free fitness classes. Outdoor gyms (also known as “parques biosaludables” or “calisthenics parks”) are most common across Latin America, Europe, and some parts of Asia (especially in Singapore and larger cities in China and India).

• An estimated 3,400 hotels offer public memberships to their fitness centers, serving about 2.3 million members. These gyms are primarily in high-end urban hotels and especially in developing countries. In lower-income countries, hotel gyms are sometimes the front-runner or only fitness offering targeting wealthy elites and expats, before the entry of standalone commercial gyms.

• GWI estimates that about 103.2 million people work out independently or at home, using treadmills, stationary bikes, weights and other home-based fitness equipment, as well as books, videos and other technologies. Note that a significant portion of this number overlaps with other categories above because many gym members also do workouts at home. Among those doing at-home workouts, an estimated 28.8 million subscribe to on-demand and streaming fitness services (via online platforms and mobile apps).

Note that while GWI’s estimates for the fitness segment primarily focus on gym memberships across different types of facilities, this is not necessarily the best way to assess participation in fitness activities (although it is the most common and feasible measurement given the availability of data across countries). Paying for a gym membership does not necessarily mean that a person is actually going to the gym frequently or participating in classes. According to IHRSA’s 2018 consumer study, over 12% of Americans with health club memberships use them less than once a month. Another recent study in the United States found that 6.3% of Americans who have gym memberships do not use them at all (data from Finder.com). In fact, many gyms build their business models around a certain portion of members having low usage rates or not using the gym at all.